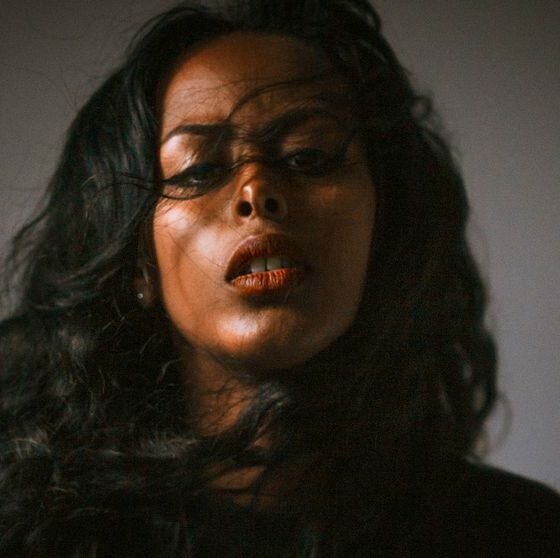 VOGUE — Immigration is changing not only the way that Sweden looks, but also how it sounds. This country’s contributions to music are disproportionate to its small size and extend well beyond Abba’s cheery pop and the indie cool of bands like Peter Bjorn and John. A politicized hip-hop scene that first emerged in the early ’90s has blossomed, and now the honey-voiced Cherrie is putting Sweden on the R&B map with music so catchy, it needs no translation. “It’s kinda funny to hear British people try to sing in Swedish,” says the singer, who has spent the last year performing all around the world. And it’s not only music lovers lining up for Cherrie, she’s also collaborated with musicians in and out of Sweden, including grime king Stormzy, who contributed English lyrics to one of her Swedish songs.

Cherrie was born Sherihan Hersi in Oslo, Norway, to Somali immigrants and lived in Finland for about a decade before moving to Sweden where her family took up residence in the Rinkeby area of Stockholm, home to a large immigrant population. Cherrie took it upon herself to become a spokesperson for the area, representing some of the challenges its residents face, from broken hearts to gun violence. Melancholy chords suited the subject and Cherrie’s state of mind at the time. Partly to keep the attention on her message, the singer stayed mostly out of the spotlight. Having gained confidence and experience, Cherrie is now ready to take center stage. “I have this new narrative that goes together with the old one,” says the artist, who is currently in the studio recording her second album. “I don’t want people to box me in, like, ‘Oh, she’s the girl from the hood, that’s what she does,’ because I’m always going to evolve and I’m just now finding ways to show that visually.”

The best example of her evolution is the video “163 För Evigt” (“163 Forever”), which recently went viral (163 is the postal code for Rinkeby). In the video, which was styled by Wasima, Cherrie wears the same pink puffer by Ella Boucht, a Finnish designer, that made headlines when Rihanna wore it. The bright color was aligned with the hopeful message—essentially, if I can make it, you can, too. “I’m very in tune with what kind of energy I want to put out there. I think [that video] really did something for me, but also for our community, because we used our visual ability and did something that was positive and it really translated, even way outside of Sweden. I’m just now realizing people don’t even need to understand what you’re singing about; it can translate through true feelings and energy. And I’m just realizing how much fun I can have with fashion and using that to put out the positive energy as well.”

Cherrie’s sound and style are largely influenced by female R&B artists of the late ’90s and early ’00s, and she nods to them when she works some throwback style in the video, pairing an Adidas tracksuit with huge hoops. “When it comes to fashion and the visual aesthetics, you can tell Aaliyah’s been a huge inspiration,” Cherrie tells Vogue. “Aaliyah and Ciara from the early 2000s—the ‘Like a Boy’ video.” Another major influence on the artist’s look is her dance training. “I didn’t even wear makeup until I was 21 because I always used to sweat in my dance lessons, so I was like, I’d rather just not wear [any].” She still keeps her beauty routine to a minimum, relying on water and a pharmacy-bought moisturizer, eyeliner, mascara, and brow definer. “I think a lot of the way I look in the videos and how I like to dress comes from wanting to be comfortable because you have to be able to dance,” says Cherrie.

The singer also takes style cues from Rinkeby, where, she says, “People are just mixing and making their own sense of style and slang and culture.” One of her recent purchases was a pair of old-school Nike TN sneakers. “I always used to see people wearing them in Rinkeby, and then when I came to Paris, it was the same thing. European hoods,” Cherrie adds, “have their own style, and it’s always influenced by African and Middle Eastern culture.” The singer counts Iman, Waris Dirie, and Halima Aden as Somali women whom she admires, and credits social media with creating a platform that has helped her to connect with her heritage; in turn, she has been supported by people who have found her through the channel. Cherrie understands the importance of role models because, she explains, “I know what it did to me not having that.”

The “third culture” idea (referring to children who are raised in a culture different from their parents’ or different than the one on their passport) is one that Cherrie has built her career upon. “I remember being a young girl and having parents of African heritage but living in a Scandinavian white city with almost no black people: You’d be confused ’cause you’re not at home there, but if I went back to Africa, I wouldn’t be 100 percent home there—because I’ve never been there, right? So, the third culture concept comes from creating your own culture of what you do have.” Cherrie goes back to Rinkeby when she can. “Some of my best friends are people who used to do really bad stuff and now they’ve turned their lives around somehow. We’ve all inspired each other. If the people who I grew up with find strength or comfort in my music, and my song might be the one that they listen to when they are doing their SATs and that kind of helps them—do you know what that does for me? That’s what makes me. I’m just trying to do something that will help me through helping others.”

Related Topics:CherrieFeaturedSWEDISH SINGER
Up Next

Somali Funk Music in the 70s: Caashooy by Ahmedey Abukar

This song is the first of a series of five recordings that tell the story of Abukar’s tragic & unrequited, love for a woman named Asha

Take a Journey Back to a Simpler Time in Southern Somalia

Both models walked for Max Mara in the brand’s Autumn/Winter 2018 show on Thursday, alongside such fashion stars as Gigi Hadid and Cindy Crawford’s daughter, Kaia Gerber.

Aden sported a silky headscarf and skirt-and-trousers combination while Adan, who was raised in Denmark, showed off a grey checkered blazer paired with a black leopard-print scarf.

After the show, Adan took to her Instagram page to thank Max Mara for the experience, posting: “Thank you for this amazing experience, @maxmara.”

Far from being the only Muslim models to take Milan by storm, the pair were joined in the fashion-forward city by models-of-the-moment Gigi and Bella Hadid, both of whom walked in a variety of shows, including Missoni, Versace and Alberta Ferretti.

For her part, Imaan Hammam, a Dutch model of Egyptian and Moroccan descent, walked the runway for Versace on Friday, dressed in a figure-hugging, belted black mini-dress.

However, despite the two hijab-clad models and litany of international names garnering praise from pro-diversity fashion insiders, some critics are slamming Italian fashion house Gucci for outfitting white models with headscarves and turbans in the brand’s Feb. 22 show.

Actor and model Avan Jogia sparked debate on Twitter after he tweeted a photo of a white model wearing a turban, saying: “Yo, @gucci… I mess with you guys… but this isn’t a good look for you… could you not find a brown model?”

Meanwhile, fashion photographer Faiyaz Kolia told Indie magazine that “Gucci got to pick and choose from cultural imagery all the things that are aligned to their ‘fantasy’ narrative without any consequences, and then so easily put on white skin… What message does that send? That it’s ok to wear a hijab if you’re young, beautiful, rich, and white but not if you’re actually a Muslim or a person of color?”